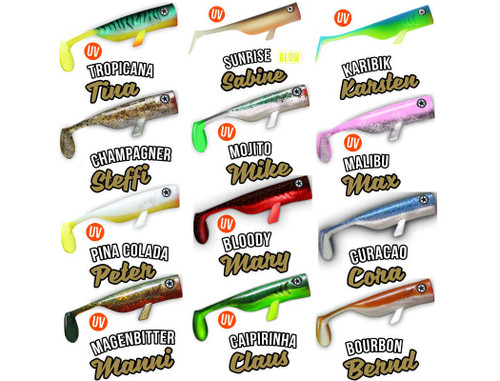 LMAB Drunk Baits 8cm have developed a soft lure that has an action that can only be described "drunk effect" has been created by a very thin connection to a relatively large round paddle tail, which sends strong pressure waves at high frequency as a bite stimulus to predatory fish. The Drunk Bait in 8cm was developed to target wary pike and perch, but has also been able to tempt any predator from zander, chub, catfish and even tempt carp to bite.

Not only perfect for fresh water fishing, with the colours as "Curacao Cora" and "Bloody Mary", which were the first saltwater ‘drunkards’’ that have strengthen the range since September 2018.  However the white-blue pattern of the "Curacao Cora" is especially convincing in salty lagoon waters, but has been proven in lakes with heavy stocks of bait fish, whereas "Bloody Mary" knows how to seduce cod and other saltwater inhabitants, but also works very well in cloudy fresh water.